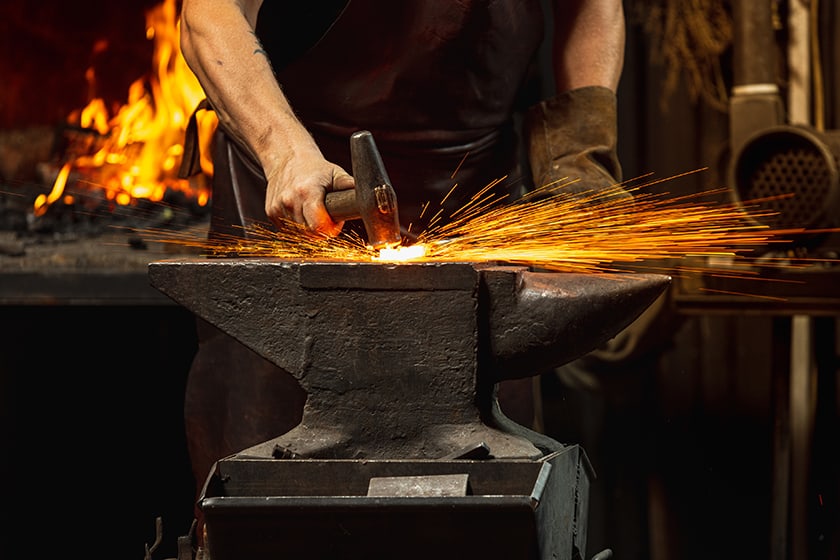 •  by Trish Dunham  •  Today (January 5) is the anniversary of our teacher Paramahansa Yogananda’s birthday. Sunburst recognizes the virtue of Temperance in association with the current zodiacal month of Capricorn. Temperance can mean many things, from living a moderate and healthful life to maintaining order in your environment. It can also mean creating good habits, including perceiving the people and scenes you witness in a positive light, and acting in accordance with those positive perceptions. Mostly, we associate temperance with the avoidance of overindulgence.

In terms of tempering a sword or knife, metal is repeatedly heated to red-hot temperatures, pounded, then plunged into very cold water. Somehow this strengthens (tempers) the blade. The virtue of temperance is like that; we all learn from our mistakes. Seared by the fires of error, when we plunge into the waters of meditation, the cooling relief of divine love gradually strengthens our better impulses, our good habits.

Paramahansa Yogananda, in his Bhagavad Gita, compares the life of every human being to the battlefield in this story. Arjuna (a great warrior) with the help of Krishna (greater awareness, or Christ consciousness) was required to slay the armies of his own cousins and lifelong friends. On one side of this battlefield were a hundred cousins with all their friends and supporters, representing the habits and ingrained impulses toward selfish, materialistic desires. On the other side were twelve or so faculties of true discrimination plus their friends, all that lead to soul happiness. This is the daily battle we each face within.

Yogananda goes on to say that we are simply a collection of habits. Isn’t it wise, in that case, to work hard on improving them every day? We show progress by beginning to slay the enemies of laziness, disorder, etc. These habits cry out and redouble their efforts to resume their former life of relative ease and comfort. This could discourage us, but it’s a time for greater faith, a time to remember spiritual blessings, and to fight on with all your might, aided by General Good Habits!

Sunburst teachings are really very simple: daily meditation (morning and evening), and trying to live a life of virtue. The devotee is not asked to give up simple pleasures such as a movie now and then, or to whip him/herself with self-scorn if she fails in any way. As we each strive on, united in our efforts, no matter how far we are separated geographically, our efforts raise the consciousness of everyone on planet Earth who cares to receive.